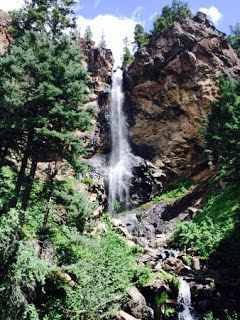 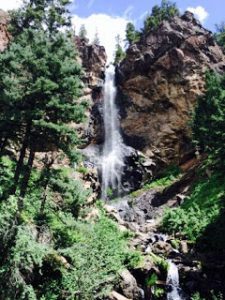 We all know about the alluring waterfall right off of Highway 160.  What most people don’t know is where “Treasure Falls” derives from.

The waterfall is suffused from legend and oral literature.  Backed into Treasure Mountain, this is one of the most populated and frequently visited attractions located near Pagosa Springs.  If we dig a little deeper than the innate beauty of this location we find several accounts of original tales dictating the origin of The Falls.
During the 18th Century, Spain and France disputed over the Southwest region.  France believed their land, Louisiana, extended south to the Rio Grande.  Contradicting France, Spain claimed that their northern boundary was the Missouri River.
As the story goes, Frenchman immigrated over the San Juan Mountains, through Wolf Creek Pass roughly around 1750.  There they began to prospect and pan for gold- collecting a worth of $33 million of unscathed pure gold.

They were attacked by Indians and their rivals, the Spaniards.  Refusing defeat, the Frenchman hid their glorious earnings in three different locations near “a great water fountain.”

During the 1840’s, a group of Frenchman returned to our mountains with directions to the loot.  They were attacked and all killed- but one individual, Le Blanc.  The survivor relocated to Toas where he was arrested.  He professed the Indian Massacre and the history of the treasure to the authorities.

Over the years, several maps surfaced claiming the whereabouts of the riches.  A man named William Yule led a group of men as they searched the entire Western Slope to no prevail.  Accounts reveal different records of travelers attempting to recover the prize, with no success.  However, in 1993 two young gentlemen, native of Fort Collins, CO, began a trek up and over Treasure Falls, into the Volcanic Mountains surrounding the rapids.  Sometime during the adventure, the young men found themselves lost deep in the peaks of Treasure Mountain. As search and rescue missions began to look for the two; the youngest of the two men was bitten by a rattle snake and died a few hours later.  As time passed, people of the town began to mourn the lives thought to be lost.  Just as hope began to wain, the second young man was found- barely alive, suffering from severe dehydration as well as bodily wounds he endured while lost.  Discovered in the pockets of his jeans were two large gold nuggets.  The boy died before anyone was able to obtain the location of the treasure.
Living somewhere so rich with history (and GOLD) is seldom.  We are privileged enough to call Pagosa Springs home- and with it comes the legend of Treasure Falls.